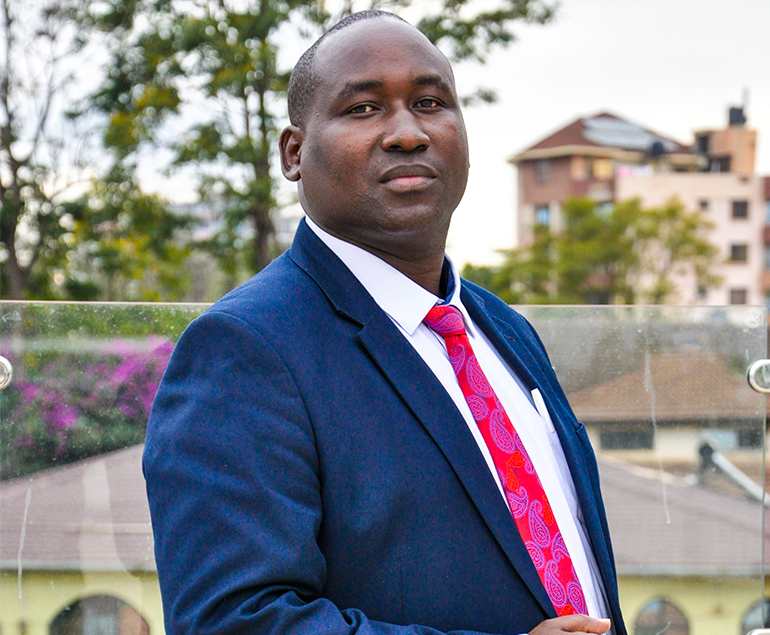 ENG. STEPHEN MUTINDA: A GO-GETTER FULFILLED BY SERVICE TO MANKIND.

He is a registered engineer with the Engineers Board of Kenya and a Corporate Member of Institution of Engineers of Kenya with more than 13 years of experience in water and irrigation sectors. He has been a practising engineer for nine years. He is finalizing his Master’s degree in Soil and Water Engineering at Jomo Kenyatta University of Agriculture and Technology and has a Bachelor of Science in Agricultural Engineering from Egerton University among other trainings.

Eng. Stephen Mutinda grew up in a humble setting in Mwala division, Machakos County in a family of six

He is the third born. He schooled at Mango PrimarySchool, joined Machakos

School, then a Provincial School but now a national school. He scored a B+ (plus), earning a placement by the Joint Admission Board (JAB) [now Kenya Universities and Colleges Central Placement Service] to undertake Bachelor of Education (Early Childhood Education) at Kenyatta University. This did not sit well with him, because he had always dreamt of being an engineer and had studied hard to qualify for the course.

This pushed him to approach JAB and luckily his placement was revised to BSc Agricultural Engineering.

You had a dream of being an engineer from childhood; what was your inspiration?

Growing up, we had an engineer in our village and I admired his life and popularity. In addition, I loved constructing things and desired to construct roads, buildings and dams.

Has National Irrigation Authority been your employer since you entered the job market?

No. I first worked with Rea Vipingo Plantations as a supervisor in January 2009 for a year then moved to German Agro Action from January 2010 to January 2011 before moving to Del Monte in February through July 2011. Then, I applied for a position as an Irrigation Engineer at the then National Irrigation Board in April 2011 through an advertisement which was placed in the dailies and secured the position in August the same year.

My work at the Authority started at Rapsu Irrigation Project as an assistant Resident Engineer and later at the Head Office where I have grown to the position of Senior Irrigation Engineer since January 2013.

Having worked with the Authority for years, what has been your driving force?

Service delivery to mankind. It fulfills me when I see people moving from one end to the other; that is when a farmer gets water and uses it for irrigation and through that their life is transformed socially and economically.

What is that one achievement that you feel crowns your career achievements?

I have achieved a lot in my career as an engineer. One notable achievement is the timely completion of Thiba Dam, which is a mega project; one of the biggest dams in the country and the first for irrigation. Rice farmers downstream at Mwea Irrigation Scheme have for a long time suffered from insufficient supply of irrigation water. The completion of Thiba Dam is a game-changer. The river flow has been stabilised and there will be water throughout the year. With the installed infrastructure, farmers will be able to practise double cropping as well as reap double the output as a result of sufficient irrigation water.

Challenge(s) encountered along the way and dealing with it (them)?

Being the project manager of such a project –Thiba Dam — cannot lack some ups and downs. The work pressure to complete the implementation of the project was overwhelming. However, with the support of our CEO, Mr Gitonga Mugambi, EBS, the head of infrastructure Eng. Charles Muasya, REng, MIEK, the management and the staff, we did it. Besides that, timemanagement which is a very critical virtue I adhere to and the cooperation with the contractor and the consultant through clear strategies enabled me to achieve the set objectives and that of the Authority as showcased through the timely completion of the dam.

“Nothing can bar me from reaching my goals and targets”

Do you love reading?

I do. I love reading professional materials such as the International Commission on Large Dams (ICOLD) publications to upgrade and advance my expertise in matters engineering.

How are you ensuring that young engineers deliver?

It is always my endeavour to mentor young engineers coming out of university to tie theory to practical experience so that they can achieve professional registration status.

Do have time for something else outside work?

(He laughs heartily). My duties here at the Authority are engaging but like I mentioned earlier, I have grasped the art of proper time management, thus I get time to spend with my family, catch up with friends, concentrate on personal projects such as farming and go to the gym.

Giving back to the society… do you appreciate this concept?

Yes. You gain a unique sense of purpose by serving those around you and spending time to enrich your community. In the last five years I have served on the Board of Management of Mango Secondary School. I am also a church elder in my village. In addition, I have supported education needs of two orphans. One is a third-year student at JKUAT pursuing Bachelor of Commerce and the other one is a Form Three student. I have been with them since they were in Class Seven.

“Always have a target and aim at achieving it”