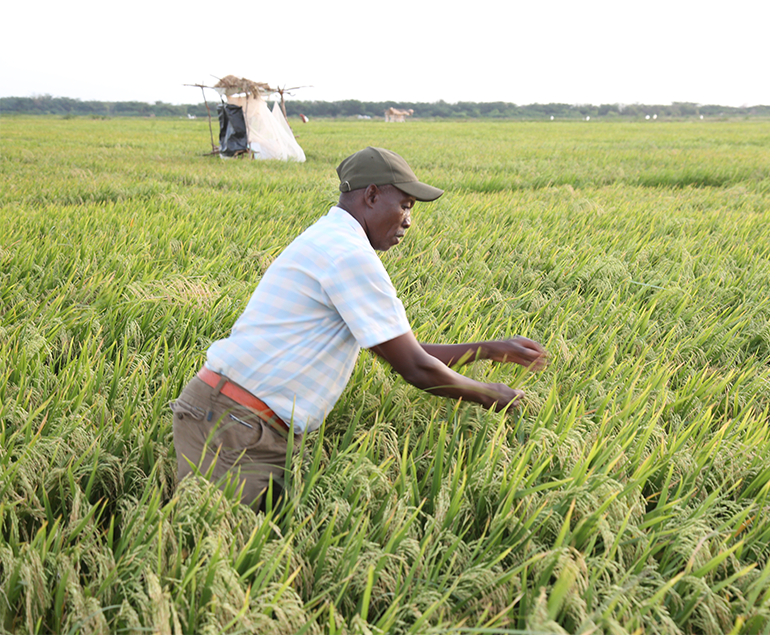 A JOURNEY OF HOPE: SAVING BURA WITH KOMBOKA RICE

Komboka rice was launched in late 2020, promising a yield of about 35 bags per acre. The rice was developed by IRRI and registered by KALRO. Since then, it has been promoted through a collaboration of KALRO, IRRI and NIA.

“Komboka rice farming has changed my life. This season, I am expecting to harvest an average of 34 bags of 90kgs from an acre,” Stephen Jaramba, a rice farmer at Bura Irrigation Scheme, says. Peter, a rice farmer from Bura has been getting 36-120kg bags, from a 1.5-acre plot. “For my 1.5 acres, growing this variety from scratch would cost roughly KSh130,000. The crop has a ratoon that requires little crop management, yields at least 50 percent of the initial production average,” says Peter.

The NIA provides irrigation water at Bura at a one-off fee of KSh7,500 per 1.5 acres in six months, covering both the main crop and the subsequent ratoon crop. Additionally, it trains in the best farming practices for Komboka rice.

Most of the farmers practise mechanised rice harvesting, which growers say is cost-effective. “We pay a fee of KSh8,000 per 1.5 acres for a combine harvester, which is a drop from the initial manual labour costing KSh15,000,” says Mr Somo Ismael, a farmer at Bura Irrigation Scheme.

Growing of Komboka has not only contributed immensely to the food basket in Tana River but also the economy. In the Financial Year 2020-2021, farmers earned KSh48 million and in 2021/22 KSh216 million from Komboka rice farming. Additionally, it has created employment to the youth during land preparation, weeding and packaging of the paddy rice. The National Cereals and Produce Board (NCBP) has provided farmers at Bura with the ready market for the rice. NCBP pays KSh60 per kilogramme of paddy rice up from the initial KSh40.

Mr Peter Orua, the Manager for Bura Irrigation Scheme, is optimistic that this price will go up with more people from the private sector coming in to buy the rice at KSh62 per kilogramme.

Mr Somo says that NIA has intervened in a number of challenges farmers face at the scheme, including acquiring certified seeds and land levelling. Manual levelling takes time, especially for those holding large tracts of land.

Mr Orua, says the scheme has put 2,031 acres up from the initial 1,400 acres under rice production. This acreage is at different growth stages in the current cropping season. It is proof that Komboka has widely gained acceptance from farmers at the scheme and beyond. He attributes this to farmers having travelled from as far as Mwea to Bura to grow Komboka rice at the scheme. The irrigation potential of the scheme is 25,000 acres; currently 12,000 acres are developed while 10,000 acres are in active use.