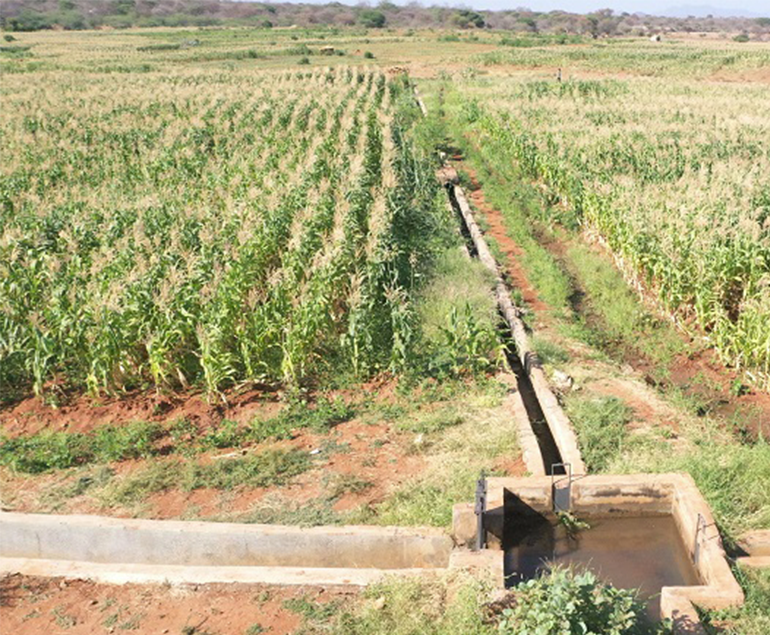 Wikithuki/Usueni Irrigation Scheme sits in Usueni location of Mwingi North in Kitui County on the banks of River Tana. The National Irrigation Authority started the scheme in 2011 to enhance food security, boost income generation among farmers and create employment. The scheme has an irrigation potential of 10,000 acres.

According to Chris Opondo, the manager of Usueni Irrigation Scheme, farmers in the first phase are now at the third season of maize production and other crops such as green grams, watermelon and fruit trees such as mangoes and avocados.

The phase is benefiting 400 households directly. Farmers in the last season harvested 4,000 metric tonnes of grains. The estimate production of maize was 7,500 ninety-kilogramme bags with each acre producing 15 such bags that are sold at Sh3,500 each. The revenue from an acre hits Sh105,000 annually. Upon hitting the full potential of 10,000 acres, the project will generate about Sh1 billion yearly.

People will no longer rely on relief food. The project will increase food security in Kitui and Kenya at large. It will also improve nutrition, increase incomes, and enhance standards of living.

Farmers in the scheme, the manager says, have faced challenges of high cost of pumping water to the farms, lack of extension services and access to farm inputs. To reduce the burden for farmers, the Authority is bringing on board the County Government of Kitui and Usueni Corporative Society so that farmers can benefit from extension services, tame soil erosion and enjoy good farming practices, get inputs subsidy, and prepare land at affordable rates.

Also in the pipeline is a deal with investors through organisations such as International Crop Research Institute for the Semi-Arid Tropics (ICRISAT) and Kenya Agricultural and Livestock Research Organisation.