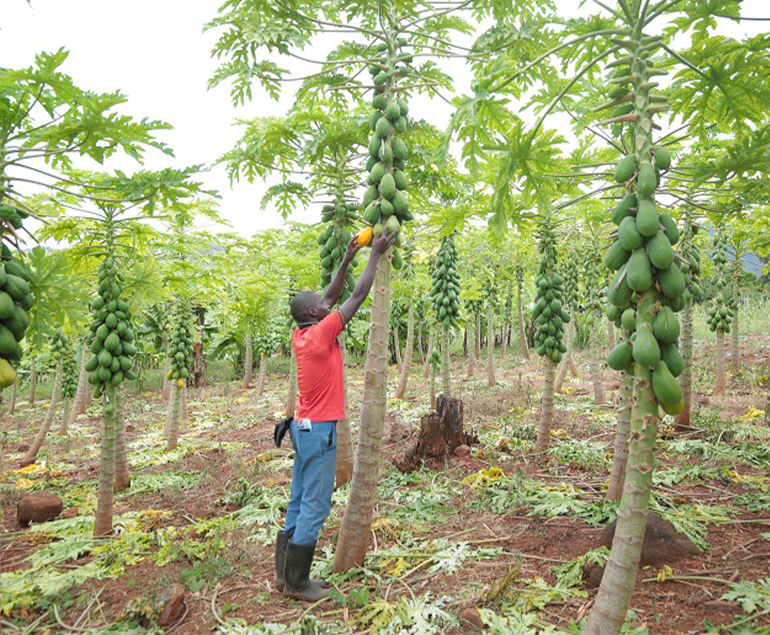 As American activist Rachael Corrie urged people to follow their dreams and believe in self, Mr Daniel Mugendi is keen on making it in life through irrigated farming. While studying to become a teacher in future, he believes farming can make him achieve his goals and educate his siblings.

Mr Mugendi started as a green grams, cow peas and maize grower. “Due to inadequate water, I could not grow pawpaw as they required a lot of water. However, thanks to the implementation of Muringa Banana Irrigation Project phase III (Mukami Line) in Tharaka Nithi County by the National Irrigation Authority, I have ventured into pawpaw farming,” he said. The returns from pawpaw alone, he says, have met all his needs.

The farmer takes pride in being one of the main suppliers of pawpaw in his county with 1.5 acres under the crop, having started with less than a quarter acre. From 1.5 acres, he gets KSh10,000 per week that translates to KSh240,000 per season of six months.

Mr Mugendi lists cost of fertiliser and insecticides as the main challenges, adding water is no longer a thorn in the flesh thanks to the irrigation project that has made farming a choice for Igamba Ng’ombe people. Through growing various crops, families and individuals earn more in the farm jobs.

Through the proceeds of pawpaw farming, he has educated himself, his brothers and sisters. He is undertaking an Education course at Mount Kenya University while his siblings are in different levels of education.

Eng. Gitonga Mbijiwe, the Regional Coordinator, Mount Kenya East, says 6,000 acres have been put under irrigation in Tharaka Nithi with a plan of expanding to 11,000 acres by the end of next year. He asserts that the net revenue of the region will grow with the expansion of agriculture.