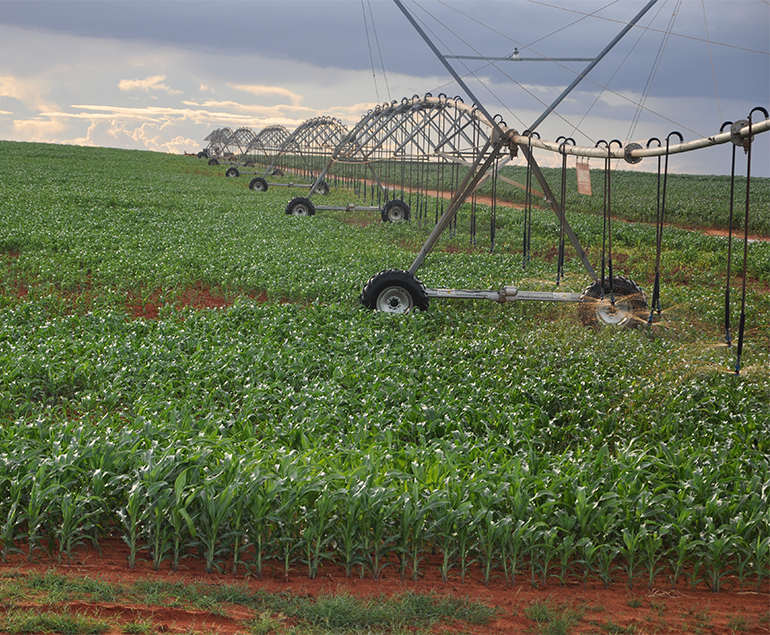 IRRIGATION METHODS SUITABLE FOR YOUR FARM AND CROP

IRRIGATION METHODS SUITABLE FOR YOUR FARM AND CROP

Irrigation Systems/Methods According to Eng. Jairus Serede, a Senior Irrigation Engineer at the National Irrigation Authority, these are methods in which water is delivered to land or crops to supplement what is lost through evapotranspiration, which is water lost through evaporation and transpiration. Collins English Dictionary defines these methods as systems of supplying (land) with water by means of artificial canals or ditches to promote the growth of crops.

He classifies these systems into three main categories as explained below:

Surface Irrigation: This refers to systems that deliver water to crops using gravity-fed, overland flow. This system can be classified into basin/flood irrigation system and furrow irrigation system. Under basin irrigation, an area is divided into checks or basins. It is suitable for crops that are not affected by excess water such as rice. In furrow irrigation system, the soil surface is channeled and furrows are formed to direct the flow and avoid flooding the entire field for crops such as maize. Water moves in these furrows and seeps to the crop root zone.

Basin irrigation design is simpler than either furrow/border design since tail water is prevented from the existing field and the slopes are usually small.

Sub-surface Irrigation: This method involves applying water from beneath the soil surface either by constructing trenches or installing underground perforated pipes or tile lines. Water is discharged into trenches and allowed to stand during the whole period of irrigation. Lateral and upward movement of water by capillarity action to the soil between the trenches or pipelines. Example of this method is the sub-surface drip irrigation system.

Overhead Irrigation: Water is pumped and sprayed down onto the plants from flat spray nozzles. These may be mounted on an overhead network of aluminum pipes or even simply mounted on the top of the stake. Examples of this method are sprinklers and centre pivots.

Irrigation methods differ in terms of water applicability and are influenced by the following factors:

Landscape: This is the slope of the ground and how uneven or leveled it is. For example, in a flat
land, drip or flood irrigation methods will be suitable. In other cases, slant areas will require other methods, probably sprinkler systems.

Climatic conditions: Ground level irrigation methods are directly affected by conditions such as dryness, humidity and speed of wind. Where the speed of wind is high, the sprinkle irrigation might not attain uniformity of water application. Basin, furrow and drip irrigation systems may be appropriate.

Crops: Type of crops and pattern of sowing determine irrigation method since they require different quantities of water. Growth of plants and their heights are also a consideration. In taller plants, basin irrigation method is more suitable as compared to the sprinkler method.

“Proper choice of irrigation method saves on water use, ease of operation and result into higher yields.”