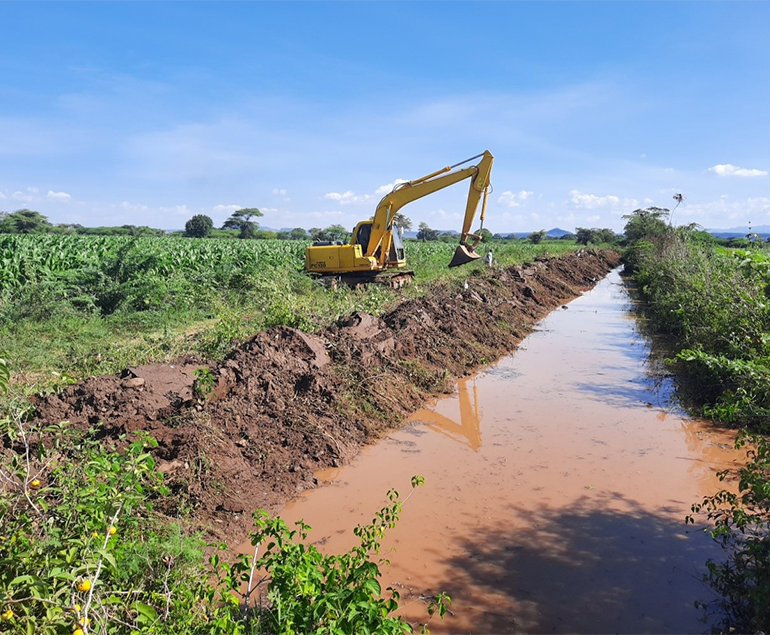 Unyunyizi News sat down with experts to help in understanding “siltation”. Eng Jairus Serede says siltation is also known as sediment pollution; it is an undesired accumulation of sediments (fine particles of sand, mud, and other materials) in irrigation structures such as dams and canals.

Most often it is caused by soil erosion or sediment spill. Sediment entry into irrigation channels can occur both from natural causes such as heavy runoff and human behaviour such as overgrazing or deforestation.

Siltation affects water distribution; its accumulation can create hazards, including diversion of water from its original channel and the sediments can gradually fill reservoirs, suffocate spawning beds, clog or damage water inlets and gates.

Water systems can also be blocked, causing reduced water flow leading to limited water usage for irrigation and agriculture and other areas like transportation.

Further, proper designs of these infrastructures, that is design of minimum slopes, velocities of flow in channels to prevent siltation for given discharges, flows and depth, is a major way of preventing siltation, explains Eng Serede.

“Silt traps and sedimentation basins are also an effective way of reducing silt build-up into dams and subsequent irrigation infrastructure. Besides infrastructure designs, vegetation growth on the inner and outer canals have also proven effective in the catchment zones, abstraction points, conveyance zones and infield infrastructure”, says Christanus Murunga. He further adds that using conveyance pipes and lining of canals has been effective in dealing with siltation.